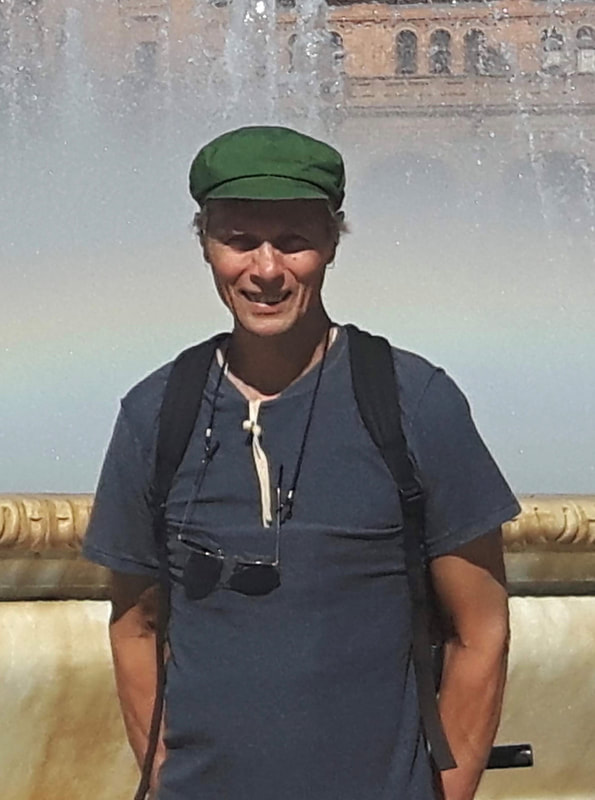 A similar tide arrives on Vancouver Island, where writer Terence Young has crafted his third book of poems, Smithereens. Diffuse and conversational, the poems are thematically bound together by the thin wire of time—what it takes from us, what it leaves behind. To get at these ideas, Young consults a guidebook of the west coast’s natural landscape. One poem, “The Animals Lie Down to Die,” discovers a deer skeleton nestled into the “soft vellum of / years of needles,” a scene that becomes an imagistic analog for the speaker to consider his own mother’s passing (45).


Yet Smithereens resists approaching its environment as a purely symbolic terrain, ripe for easy self-and-nature symmetries. No—these forests are “illegible,” and however much the speaker searches for a clear mirror in the landscape, it is always rearranging itself, evading his pins of explanation (45). In “The Rites of Spring,” Young catalogues a set of ecological injuries that have rapidly transformed the local environment: “sun damage, frost damage,” “climate change, gamma rays.” (78). How does one affix words—like “here,” like “home”—to a location that is increasingly variable, never exactly the same as it was yesterday?


Perhaps it is a start to simply bear witness, to uproot one’s language and pull it alongside a place as it moves. In one poem, Young’s speaker engages in a simple meditation: recording onto the page how the weather shifts, from moment to moment, around him. First, “tides / roll back over mud.” Then, “clouds hang lower and lower.” And here—above the ocean, inside the poem—“it rains” (73).

From The Malahat Review

As a teacher and as co-founder of the Claremont Review, a literary magazine for emerging writers, Terence Young has spent many years helping budding poets hone their craft, and that attention to wellmade, artful verse is evident in his own third collection of poetry. Young experiments with forms and subjects so the poems in this book are artfully diverse and take different shapes. Surprise is a device he employs deftly as readers learn that a familiar song is in amphibrachic tetrameter, that whistles can be made from alder shoots, and that Gary lived “under a tree / for two years.” Many poems are elegies lamenting both the loss of friends and family and also of innocence and of youth. The final section of the book is an epilogue made of three poems: “What We Keep,” “What We Save for Last,” and “What Remains” that send the reader back into the bulk of the collection for a second helping of craft and wisdom.

Rob McLennan is a Canadian institution when it comes multi-tasking bloggers, interviewers, poets, editors and general practitioners of English. His interview of me -- entitled "12 or 20 questions,"  as are all the interviews ---is one of hundreds you can browse at the link below:
​https://robmclennan.blogspot.com/2021/08/12-or-20-second-series-questions-with_01999015822.html​​
Listen to CFMU's Jamie Tennant while he interviews me about Smithereens. This recording is available on his website in a wide collection of interviews, which he titles "Get Lit," a real treasure trove of over 200 conversations with authors from across Canada. You can listen to it here:  https://www.jamietennant.ca/index.php/2021/07/29/e245-with-terence-young/ 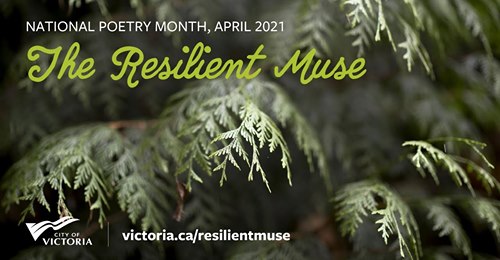 A new collection of poetry is forthcoming from Harbour Publications. See News. 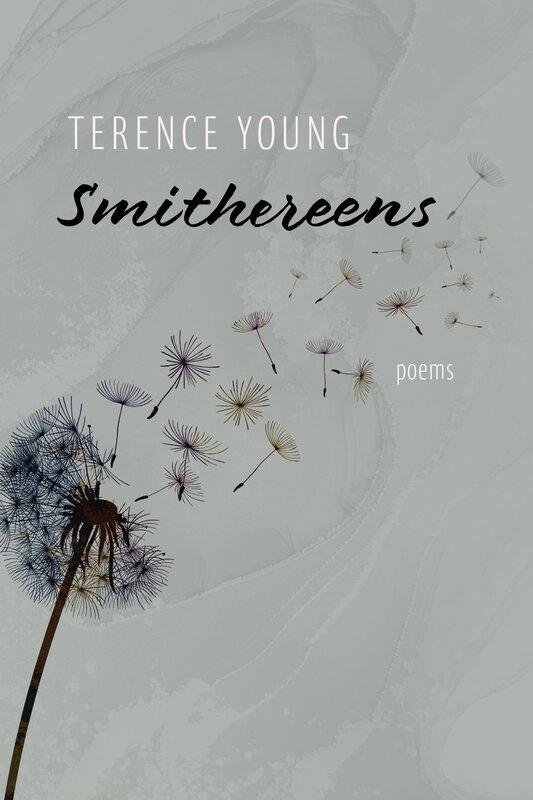 In a serendipitous and rare twist of luck, the poem "Tender Is the Night" placed first in The Nick Blatchford Occasional Verse Contest of 2019. The list of winners can be seen on my News page, and, once it has been published in TNQ, there will be a copy of the poem as well. 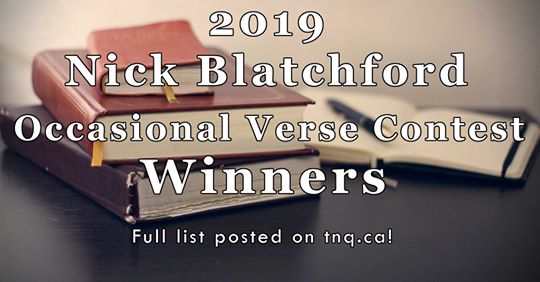 ​On the heels of a second place in TNQ's Nick Blatchford Occasional Poem Contest, 2018, the poem (The Bear) was nominated for a National Magazine Award and awarded a silver. To read the entire poem and the interview about it,  see my News page. 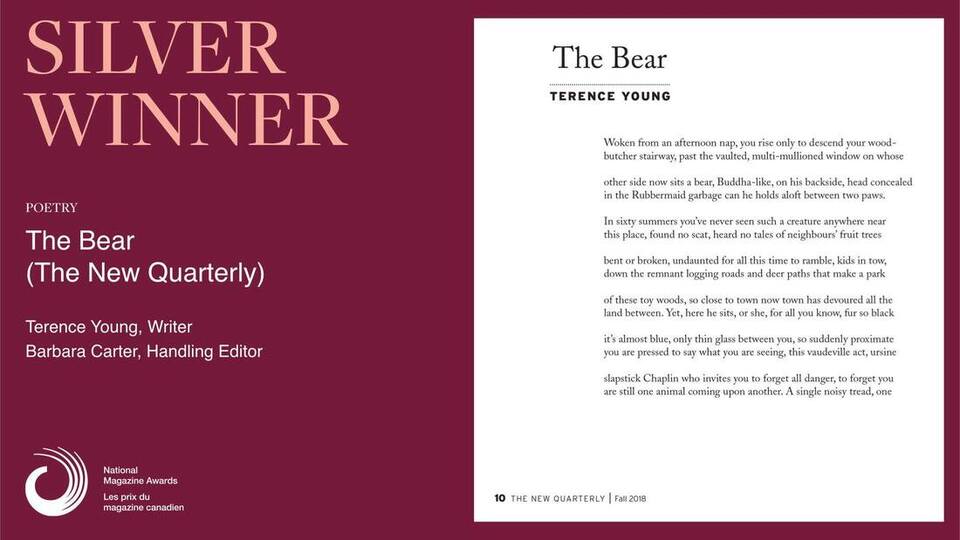 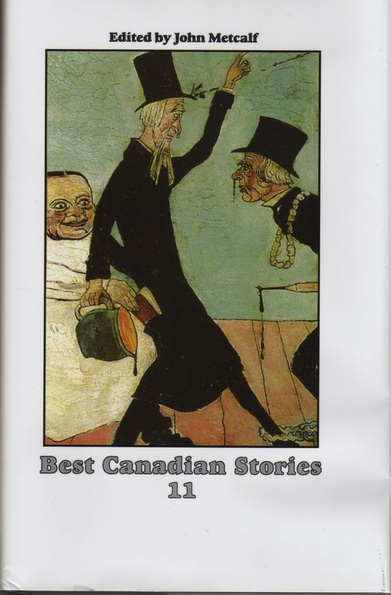 Oberon Press released the forty-fifth edition of Best Canadian Stories on January 12th, 2012. The story "That Time of Year" from The End of the Ice Age is part of the 2011 anthology.(Cover art by James Ensor)

The End of the Ice Age, launched April 25th, 2010, was published by Biblioasis. Many thanks to Dan Wells, John Metcalf and Dennis Priebe for all their help. (Launch photos) 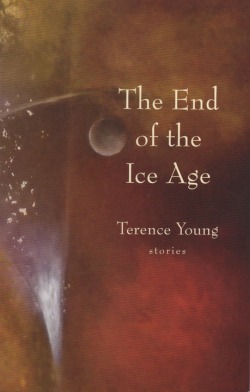 "Contrary to the codes of cliché, there’s more to men at midlife than Ferraris and pharmaceuticals. In his fifth book, the excellent short story collection The End of the Ice Age, Terence Young trains his sharp eye on the tricky state of being between young and old. His meaningful stories catalogue an array of possible experiences that reach beyond the platitudes so heavily relied upon by lazy advertisers, and reveal more nuance than can be expressed in 30 seconds."
---Mark Paterson, The Rover (Read the full review here.)


"Young's style owes something to the hard-boiled prose of postwar American writers. His stories move confidently. Their pacing is swift yet attentive. They tend to be strongest when the material is most difficult. Mole evokes the terrible availability, even mundanity, of acts of violence. The almost elegiac tone suits the long suffering of its characters, left beautifully understated. The less spoken, the more said. "
--- Julian Gunn, The Ottawa Citizen (read the full review here)


"Young’s minimalist style and stark realism are nonetheless Carver-like. His stories are also gritty and precise, with touches of poetic prose, without much resolution. If you’re one of these old fashioned folk who want to like the protagonists in your stories, you’re in trouble."
--- Cherie Thiessen, ABC Bookworld (Read the full review here)

"Young’s ability to create an engrossing world in ten or fifteen pages, one that convincingly constructs a range of characters, is impressive. A seamless flow backward and forward through time, the deft plucking of the right detail, a spare prose that doesn’t read thin, and conversational exchanges that ring true are some of the qualities that allow the stories to achieve their effect. Rolex makes a watch called The Oyster. The Oyster’s precursor was called The Hermetic. Like the famous watch, Young’s stories exhibit a compact richness. Their progression is the skilled insertion of the blade that pries open the watch case, the oyster’s carapace, the hermetically sealed outer shell that people routinely present to one another. Revealed are the complex and vulnerable inner workings in motion."
--- Lachlan Murray, for The Vancouver Writers Festival. Full review online here or under Reviews.


"Terence Young’s fifth book (and second short story collection) lulls you with the
everyday and the seemingly mundane and then you get crushed by something so real that
you curse out loud and even though the librarian might throw you out you keep reading."
--- Carte Blanche

"There is beauty, manifest beauty, in the prose: stamped with a Metcalfian imprint, the writing sometimes draws the reader up short with its force, its multi-valence, the poignancy of what the characters are saying to one another. A particular strength of Young’s is how convincingly he writes about marriage and long-term attachment: all the relationships in his stories are tough, and fierce,, and depressingly erosional. He creates a view of entire lives spent together in just a few sentences, and the effect is levelling. One can’t help but say, These people choose to live this way. And that they do seems entirely fitting."
--- Shane Neilsen, The Fiddlehead, Spring 2011

"You should read these stories. But consider this a warning: you will find yourself nodding your head in agreement that the world is a sad and messed up place. These stories leave a stain on the heart."
--- Kathryn Carter, Canadian Literature