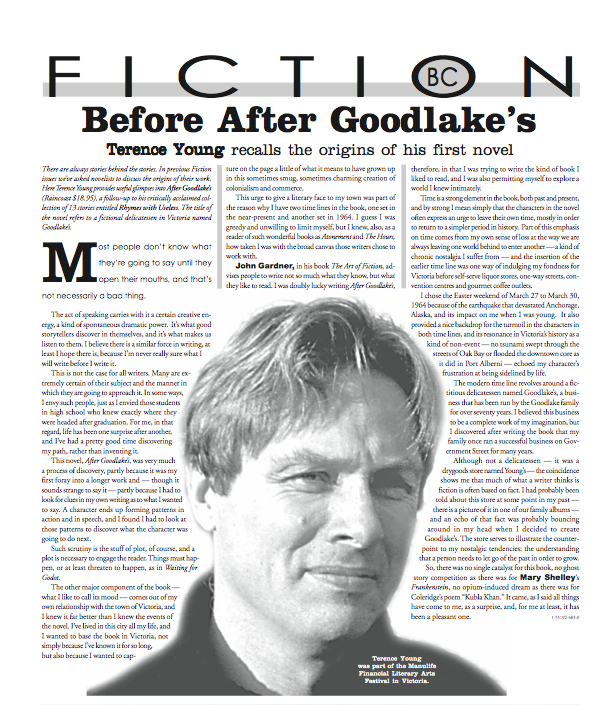 ---After Goodlake’s is a first novel by Victoria writer Terence Young. His earlier published works were a volume of poems(The Island in Winter 1999) and the short story collection Rhymes with Useless (2000) which won high praise for the way he explored what one critic called that “hapless institution, the modern family”. His characters exhibited the gamut of human foibles but the delineation was always tempered with sympathy and often with humour. Young, who confesses that he finds every aspect of writing hard, did not deliberately set out to write a novel. He was working on a number of sketches for possible short stories but nothing seemed to quite gell. However, he became increasingly attached to some of the characters—an off-beat young woman attracted to an older man; a 12-year-old boy cursed with angry, bitter parents and a school bully; a young man enduring a dead-end job for the sake of musical ambitions. Unwilling to abandon these creatures, he suddenly decided that they ought to meet each other, maybe even somehow become related. And that, unlikely as it sounds, provided the genesis of the current novel.

Goodlake’s is the name of a third generation Victoria delicatessen now run by Fergus and his wife Annie, who is in charge of its hugely successful sideline catering business. The jacket blurb suggests that the novel is centered on the fact that Fergus, despite apparently loving his wife, has embarked on an affair with a much younger woman. However, the novel involves more than a mid-life male identify crisis. Rather it paints the picture of two people so engrossed in work that they have become blinkered to the rest of life until each, in quite different ways, experiences a sudden subconscious desire to get free. Following a brief prologue which features the delicatessen itself as the main character, and incidentally contains some of the most poetic writing, the novel is shaped by frequent shifts of time and focus so that although third person narration is used throughout, we gradually acquire an in-depth understanding not only of Fergus and Annie, but also of their weirdly named son Helios, the would-be musician, and their long suffering, astute but tight-lipped employee, Doris. This episodic development gives a layered effect, revealing not only the interconnectedness of these lives but the private thoughts and feelings of each individual. The only disconnect I felt was between the young 12-yearold Fergus and his middle-aged self. But this, after all, is a novel, not a psychological study and I would not gladly give up the wonderful incident in which young Fergus, despairing of his parents’ unconcern about a possible tsunami, flees on his bike to higher ground, secretly hoping that the wave will destroy everyone and everything that is making his life difficult. Young seems acquainted with a variety of lifestyles and he is able to depict these with accuracy and amused insight. Thus Helios alleviates the crushing boredom of mail sorting with the odd joint. Annie caters for a teachers’ development day where the workshop’s captive audience is learning to get in touch with a personal spiritual guide. Then there is a surreal scene in which Fergus gets involved with erecting an enormous wooden cross. After the climactic fateful dinner party, the pace slackens considerably as Young works through a denouement that leaves his characters somewhat wiser. The reader is glad for Fergus and Annie, but this reader was also glad to have enjoyed Young’s command of language. His writing exhibits a fine sense of irony, both situational and tonal, and he has a poet’s eye for metaphor. Fortunately, he uses both these literary devices sparingly and to good effect, at times producing prose the reader wants to relish and reread. For anyone who needs to grope for words, his description of Annie’s attitude is a delight.

“Annie congratulated herself on finding the precise term for what she was feeling. Unlike Fergus, who assumed every instance of forgetfulness, each failure to retrieve a word was a precursor to complete synaptic collapse, Annie dwelt in the land of her own language like a foreigner. It was enough for her simply to approximate meaning, to come close to what she meant, the way a tourist in Paris might be content to ask for ‘the little metal object that opens the door’ when the word for key declines to surface.”
—Jacqui Hunt in Word Works, Winter 2005


--- After Goodlake's, Terence Young's first novel, looks like a hefty family saga in the traditional mode. It's a tale of three generations of British Columbians, a story about a midlife crisis involving an adulterous man and a younger woman, and a coming-of-age narrative. It's also significantly more than the sum of these things. Young's plot is a familiar one. Fergus Goodlake, the proprietor of a Victoria deli, is having an affair with a much younger woman, but he's not sure why. He tries to feel guilt about compromising his reasonably pleasant marriage, but he fails. His wife, Annie, senses his dissatisfaction but suspects nothing. Meanwhile, his son, Helios, has rejected bourgeois life and settled for a life as a postal worker and hotel clerk, and is all the happier for it. What sets After Goodlake's apart from the thousands of "adultery threatens a middle-class marriage" novels that have been written since Madame Bovary? Curiously, it is Young's take on religion that makes the book feel fresh. He uses faith to set up some decidedly odd puzzles, conundrums that aren't easy to solve. Fergus is an unlikely Christ-figure, but he awoke from a childhood coma on Easter Monday, and, as an adult, is nearly killed by a falling crucifix. From these plot points, fault lines radiate through the characters' beliefs, calling all of their actions into question. It's this side of the novel, not the Goodlakes' neuroses or Young's manically descriptive prose, that reveals its author's promise. At its best, After Goodlake's recalls the novels of another West Coast author: Jack Hodgins. Young isn't as comic as Hodgins, and he doesn't go in for the magic-realist flourishes that pepper Hodgins's best work, but the two writers share a wild expansiveness and a willingness to read the past and present in almost mystical terms. Young falls short of Hodgins in his storytelling, which is often so cluttered that the characters trip over the writing, but his willingness to think big, even in the midst of a mundane story, augurs well.
--Jack Illingworth